– The last quarter of 2017 presented few surprises around consumer spending when compared with the rest of the year, according to Moneris Solutions Corporation (“Moneris”), one of Canada’s largest processors of debit and credit payments. The year’s final quarter showed an increase of 4.26 per cent in dollar volume over the same period last year. This result is consistent with the rest of the year, with 2017 posting an overall increase of 4.14 per cent compared with 2016.

“Stability and consistency defined 2017 when it came to spending in Canada. Quarter over quarter were almost predictable, with incremental increases in growth over the year before and no significant dips or spikes, a trend we’ll likely see continue through 2018,” said Angela Brown, President and CEO of Moneris. “While there are always variables when it comes to the economy on both the national and international front, we foresee the year ahead to continue on this trend of modest, steady growth.” 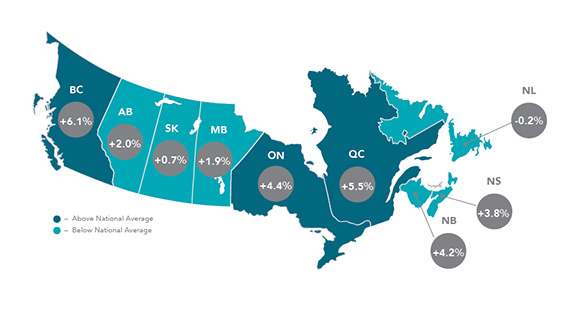 Both credit card and debit card usage are up over the same time last year, with increases of 5.81 per cent and 1.45 per cent, respectively. Similar to last quarter, the results are in line with other economic indicators. Canada’s GDP1 remained flat, while average weekly earnings2 and retail sales3, posted by Statistics Canada during the October time period, rose.


The month of November had the strongest spend increase this quarter – up 5.69 per cent over 2016 – as Canadians kicked off the holiday season with a strong Black Friday, 2017’s biggest shopping day for dollars spent. December 22 was 2017’s “busiest” shopping day with the highest number of transactions made. Boxing Day also came in strong, with an increased spend of 8.97 per cent over last year, but both Black Friday and December 22 eclipsed Boxing Day in terms of overall spend. Both days had 45 per cent higher spend volumes compared to Boxing Day.


International visitors to Canada spent more in the fourth quarter of 2017 than during the same period of 2016, with an increase in volume of 14.44 per cent.


While travellers from the United States continued to spend the most in Canada, showing a 15.08 per cent increase over the final quarter of 2016, spend from visitors from China was up 15.70 per cent, Mexico up 62.80 per cent, and the United Kingdom, up 10.66 per cent, increased from last year. Comparing 12-month data from 2017 to 2016, international spend has increased 8.88 per cent.


While these are significant increases, they are much lower than the adoption of consumer spending on contactless as reported in Q4 2016, which was up 120.73 per cent year over year. As more Canadians become accustomed to paying with contactless solutions, adoption rates will not be as steep.


MonerisMetrics is an insightful Canadian spending indicator powered by Moneris. It provides information on spending activity in Canada across a range of categories by analyzing credit and debit card transaction data. The percentages cited are derived from actual sales volumes — the dollar values of credit and debit card transactions being processed by Moneris merchants — compared with sales volumes from the prior year.