If you were thinking of buying a bicycle, now’s a good time.

Our Moneris® data reveals that as gas prices hit new highs, the cost to top-up the tank in Canada grew by 25% when compared to the same period the year prior. Specifically, at unattended self-serve stations, Canadians spent $66.64 on average to fill up, compared to $52.97 last year. Meanwhile, at gas stations with additional services like convenience stores, Canadians spent $46.38 on average, up from $37.01 the year before. 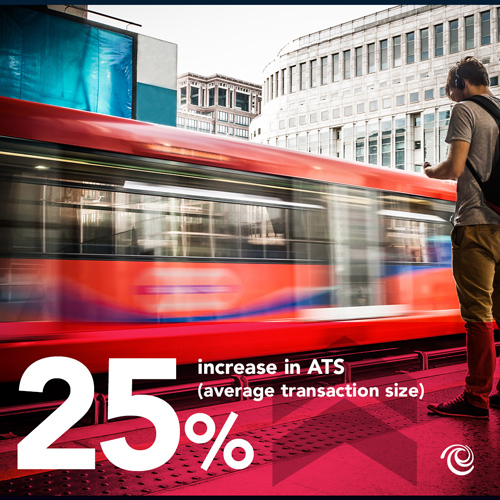 With offices slowly resuming in-person operations, those who commute to work by car might opt to work from home a little longer to avoid paying for gas. On the flip side, alternate forms of transit have seen a tremendous increase year-over-year, likely spurred on by a mix of businesses re-opening, March break holidays, and yes, potentially higher gas prices.

Disclaimer: This article is intended as general information only and is not to be relied upon as constituting legal, financial or other professional advice. Information presented is believed to be factual and up-to-date but we do not guarantee its accuracy and it should not be regarded as a complete analysis of the subjects discussed.

In partnership with Moneris® Data Services, the Angus Reid Group conducted an online survey among a representative sample size of 1,515 adult Canadians to characterize their spend behaviours in response to economic influences.

Consumer Spending Shows Signs of Slowing Down, As Canadians Feel the Pinch of Inflation

Consumer Spend Trend: The Canadian Grand Prix was a Boon to Montréal

The Canadian Grand Prix is nothing short of a festival for attendees. From decorated patios to pop-up shops on the streets, the city of Montréal really kicked into gear.