Toronto, ON – July 24, 2019 – Contactless transactions continue to account for the majority of card present transactions in Canada, according to the MonerisMetrics Quarterly Report released by Moneris Solutions Corporation (“Moneris”). Closing the second quarter with a share of 52.5 per cent of card present transactions, tap payments trended upwards from the 51.5 per cent recorded in the first quarter. Overall credit and debit card spending year-over-year saw moderate growth of 2.9 per cent.

For the second consecutive quarter, contactless transactions accounted for the majority of all card present transactions. Provinces leading this trend are Prince Edward Island (57.5 per cent), Manitoba (56.0 per cent), Ontario (54.8 per cent), British Columbia (54.6 per cent), Nova Scotia (54.4 per cent), Alberta (53.3 per cent), Saskatchewan (52.3 per cent) and New Brunswick (50.0 per cent).

“The impressive share of contactless payments again this quarter is a signal that tap-to-pay is here to stay,” said Angela Brown, President and CEO of Moneris. “It’s clear that as we shifted into the spring and summer months, Canadians continued to move quickly through the checkout process. Contactless is driving real change in consumer behavior and it’s exciting to watch. We’re witnessing a shift in the market that’s accelerating the adoption of digital wallets and changing the payments landscape.”


Spending in the second quarter by Canadians went towards kicking off the summer at amusement parks (+11.8 per cent), and tourist attractions and exhibits (+5.9 per cent). With more kids winding down from school, video amusement game supplies (+19.5 per cent), and candy, nut and confectionery stores (+16.9 per cent) saw lifts in sales.


Business boomed for computer and data processing professionals in software integration in the second quarter, with a 21.7 per cent growth over 2018. Computer network and information service professionals also saw a spike of 11.0 per cent year-over-year.

Canadians who didn’t want a shoveling experience invested more in landscaping services (+11.4 per cent) in the winter months as many provinces and cities saw significant snowfall. Another common and expected trend in Q1 was an increase in business for accountants and auditors (+11 per cent) and tax preparation services (+9.3 per cent) as the tax season began. 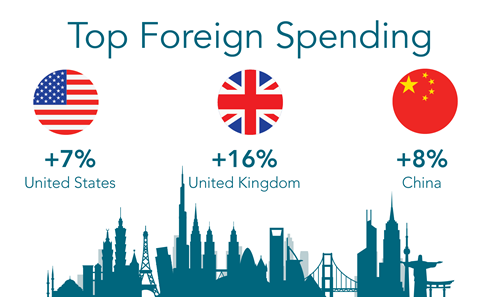 Visitors to Canada continue to come and spend, with cards from the U.S. leading overall foreign spend volume and the United Kingdom moving up to No. 2 ahead of China. Growth continued to be positive with the U.S. growing at 6.9 per cent, the U.K. at 16.2 per cent and China at 7.6 per cent year-over-year.


Please see infographic for highlights, including top categories and spending by province.


MonerisMetrics is an insightful Canadian spending indicator powered by Moneris. It provides information on spending activity in Canada across a range of categories by analyzing credit and debit card transaction data. The percentages cited are derived from actual sales volumes — the dollar values of credit and debit card transactions being processed by Moneris merchants — compared with sales volumes from the prior year.


Moneris is Canada’s largest provider of innovative solutions for mobile, online and in-store payments, processing more than one in three transactions. Serving businesses of every size and industry, Moneris offers hardware, software and solutions to help transform the way businesses grow and operate, in payments and beyond.

For more insights on Canadian consumer spending data, check out Moneris Data Services to find out how you can make more informed business decisions.
Moneris uses cookies and other technologies so that we and our partners can understand how you use our websites and to provide you with tailored ads across the Internet. To learn more or to manage your preferences, please visit our Privacy Notice. Before blocking third party cookies, note that some websites use third party cookies to remember your opt-out preferences and that you may need to enable third party cookies for your opt-outs to be captured.