Moneris reports spending in Canada up 5.05 per cent in the third quarter of 2017

Credit and debit card spending in Canada grew 5.05 per cent in dollar volume during the third quarter of 2017 over the same period last year, according to Moneris Solutions Corporation (“Moneris”), one of Canada’s largest payment processors. This quarter marks the highest 2017 quarterly year-over-year growth.


This quarter measured positive growth for all provinces but Saskatchewan, where spending was down 0.27 per cent. Newfoundland rebounded from last quarter’s decline with an increase of 1.17 percent over last year and Alberta continued a trend of positive growth with an increase of 3.08 per cent over the same quarter in 2016. Ontario, British Columbia, Quebec and Nova Scotia continue to thrive, posting growth numbers of 5.62 per cent, 6.32 per cent, 5.48 per cent and 4.95 per cent respectively.


“All year we’ve seen a strong and steady climb in spending, and this quarter continues the trend, putting Canada’s economy in a good position moving into the holiday season,” said Angela Brown, President and CEO of Moneris. “This growth is in line with the Bank of Canada’s expectations reflected in its increase of the overnight rate target to one per cent in September. We expect to see an encouraging end to 2017.”

The results are on trend with other economic indicators. While Canada’s GDP1 remained flat in July, average weekly earnings2 and retail sales3, posted by Statistics Canada during the July time period, increased. The report showed both debit card and credit card spending increased year over year, with a 3.08 per cent and a 6.11 per cent growth in dollar volume respectively.


Contactless payments continued to surge in Canada this quarter. There was a 51.53 per cent increase in the amount of “tapped” dollars over 2016. Further, the total number of contactless transactions increased by 48.35 per cent over the same period in 2016.


These increases align with the continued expansion of tap-and-pay options – for example, Q3 2017 was the first full quarter since Android Pay launched in Canada. However, the rate of new adoption has again slowed when compared to the same quarter in 2016, when spending on contactless was up 145.06 per cent year over year. This further indicates that contactless payments have become a mainstream option for Canadians. 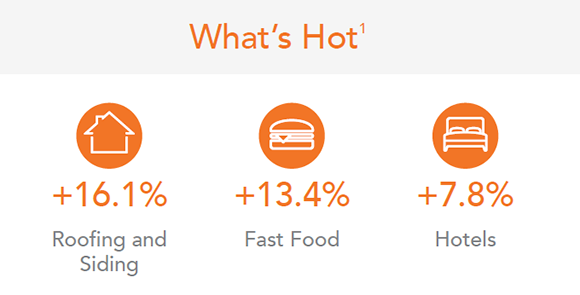 Summer spending up for foreign visitors to Canada


Overall, July was the strongest month of the quarter, with 5.96 per cent year-over-year growth. August was slightly behind July with 5.73 per cent growth, and September posted the lowest growth at 3.95 per cent.


Canada’s 150th birthday celebration may have contributed to the strong spending surge from international visitors in the third quarter, with an increase of 12.16 per cent in spending on foreign cards over the same quarter in 2016. The biggest year-over-year increases in terms of dollars spent came from U.S. visitors, up 10.86 per cent, China, up 19.85 per cent and Mexico, up 66.76 per cent. German visitors accounted for the fourth highest increase, up 20.02 per cent over the third quarter of 2016.

The increase in travellers may have contributed to the quarterly rise in spending in travel-related categories, including hotels, which were up 7.80 per cent, and restaurants, up 7.73 per cent year over year. Fast food had an even bigger increase, with growth of 13.43 per cent over the same time last year.


Canadians also focused their spending closer to home, with longer-term investments in home improvement and vehicle purchases. The home improvement category, which includes general contractors, lawn and garden supplies, hardware stores and roofing and siding suppliers, saw overall growth of 6.68 per cent over last year. Similarly, vehicle purchases were up 6.36 per cent year over year.


“It’s encouraging to see growth spread across a variety of different industries,” said Brown. “Visitors to our country as well as Canadians clearly enjoyed the summer months to their fullest, but based on the data, Canadians are also looking ahead and making practical, longer-term investments.”


Please see infographic for highlights, including top categories and spending by province.

MonerisMetrics is an insightful Canadian spending indicator powered by Moneris. It provides information on spending activity in Canada across a range of categories by analyzing credit and debit card transaction data. The percentages cited are derived from anonymized sales volumes — the dollar values of credit and debit card transactions being processed by Moneris merchants — compared with sales volumes from the prior year.