Canadian consumer spending up 5.53 per cent in the second quarter of 2016

Charitable giving up 21.08 per cent as Canadians opened their wallets for Fort McMurray


Consumer spending in Canada grew by 5.53 per cent in the second quarter of 2016 on a year-over-year basis, according to the MonerisMetrics Quarterly Report released by Moneris Solutions Corporation (“Moneris”), one of North America’s largest processors of debit and credit payments. Moneris has recorded seven consecutive quarters of positive spending increases. The second quarter of 2015 posted an increase of 6.08 per cent.

“We continue to see consistent, healthy growth, but it is important to continue monitoring contributing factors like consumer confidence, the fluctuating dollar, real estate and foreign markets to get a sense of broader economic trends. We do expect to see spending up in the third quarter as we move into the busy summer tourism season. Additionally, the bars and restaurants category will continue to see growth from special events like the Euro Cup and the Olympic Games.”

Consumer spending rose by 8.33 per cent in April, 3.88 per cent in May and 4.64 per cent in June, compared to the same three months in 2015. Moneris’ findings this quarter are consistent with positive economic indicators released by Statistics Canada showing GDP growth1 and an increase in retail sales2 in April.


Spending increases were lower in the provinces that have experienced economic downturns due to the decline in oil prices. Alberta was the only province to show a decrease this quarter, with spending down by 2.9 per cent. Saskatchewan and Newfoundland saw small increases of 0.99 per cent and 2.3 per cent. Ontario posted the largest increase (8.35%) followed by Prince Edward Island (8.11%).


Fort McMurray: charitable giving up, spending in Alberta down


Charitable donations increased by 21.08 per cent year over year. The biggest increase was seen in May (59.99%) as Canadians responded to the wildfire in Fort McMurray, Alberta, which began on May 1.

“The significant increase in charitable giving coinciding with the fires in Alberta shows how deeply moved Canadians across the country were by the devastating wildfires, and how willing they were to help those affected get back on their feet.”

While giving increased, spending in Alberta dipped in May, posting a 4.75 per cent decrease year over year.

Spending on foreign cards increased 9.49 per cent year over year, with the continued low Canadian dollar providing tourists a favourable exchange rate. Cards from the U.S. drove the highest foreign spend volume during the quarter, and saw a 10.61 per cent increase over 2015 – nearly double the overall rate of increase.


In May, Apple Pay became available to a greater number of Canadians through partnerships with five major banks, providing another convenient contactless payment option and contributing to the increasing popularity of contactless payments. 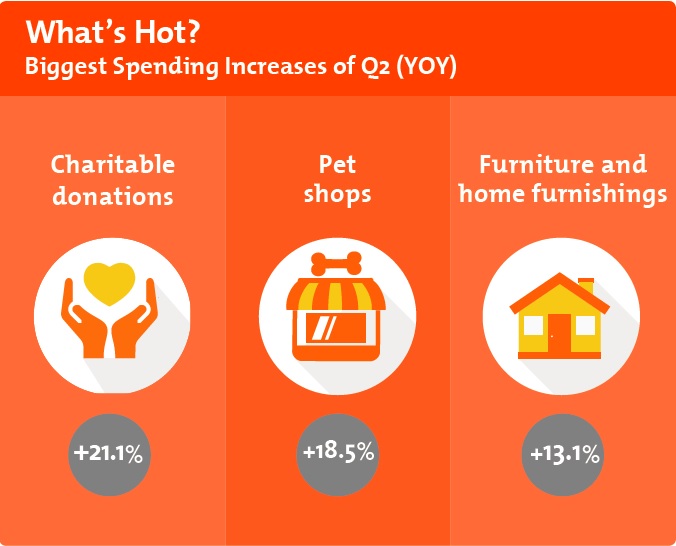 MonerisMetrics is an insightful Canadian consumer spending indicator powered by Moneris. It provides information on consumer spending activity in Canada across a range of categories by analyzing credit and debit card transaction data. The percentages cited are derived from actual sales volumes — the dollar values of credit and debit card transactions being processed by Moneris merchants — compared with sales volumes from the prior year.